$99.95
Be the first to review this product
Add to Wish List Add to Compare
Skip to the end of the images gallery 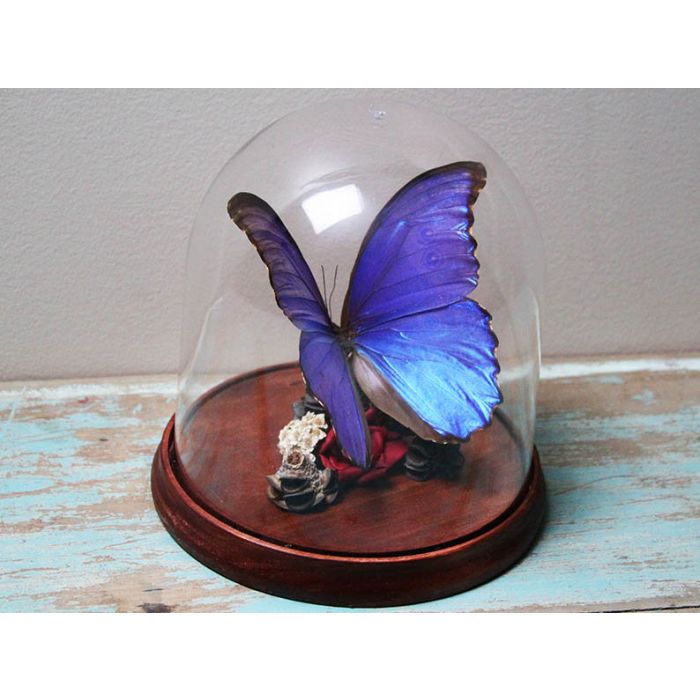 Skip to the beginning of the images gallery
Details

Undersides of both sexes are brown with a row of brown-ringed, orange eyespots, outlined with pale, metallic-bronze. Females also have a broken band of metallic-yellow bronze. Blue morphos fly rapidly through dense forests and feed on the juices of fallen fruit. Males are particularly active, chasing each other in bright sunlight.

Many Morpho butterflies are colored in metallic, shimmering shades of blue and green. These colors are not a result of pigmentation but are an example of iridescence through structural coloration: the microscopic scales covering the Morpho's wings reflect incident light repeatedly at successive layers, leading to interference effects that depend on both wavelength and angle of incidence/observance.Thus the colors produced vary with viewing angle, however they are actually surprisingly uniform, perhaps due to the tetrahedral (diamond-like) structural arrangement of the scales or diffraction from overlying cell layers. This structure may be likened to a photonic crystal. The lamellate structure of their wing scales has been studied as a model in the development of biomimetic fabrics, dye-free paints, and anti-counterfeit technology used in currency.

Primary forests of the Amazon and Atlantic. Also adapted to breed in a wide variety of other forested habitats, for instance the dry deciduous woodlands of Nicaragua and secondary forests.

Morphos are found at altitudes between sea level and about 1400 m. Morphos are diurnal, as males spend the mornings patrolling along the courses of forest streams and rivers. They are territorial and will chase any rivals.Morphos typically live alone, excluding in the mating season.

The genus Morpho is palatable but some species are very strong fliers;birds – even species which are specialized for catching butterflies on the wing – find it very hard to catch them.The conspicuous blue coloration shared by most Morpho species may be a case of Müllerian mimicry, or may be 'pursuit aposematism'.

The eyespots on the undersides of the wings of both males and females may be a form of automimicry in which a spot on the body of an animal resembles an eye of a different animal to deceive potential predator or prey species; to draw a predator's attention away from the most vulnerable body parts; or to appear as an inedible or even dangerous animal.

Predators include Royal Flycatchers, Jacamars and other insectivorous birds, frogs and lizards.

Reviews
Write Your Own Review